Cejansij (TNN) – Planets controlled by the Resistance and Jedi Order came under attack on Y21 D139 as Black Sun and the Tresario Star Kingdom launched strikes against rebel-aligned territories in the Mid and Outer Rim. In weeks prior, spokesmen for both Black Sun and Tresario promised retaliation against the Resistance and Jedi in response to attacks on planetary governments friendly to the Galactic Empire and Faerytail Family, commenting that the defenses of many neighboring rebel strongholds had been severely weakened by the collapse of the New Republic, as well as the recent sudden increase in investment by the Resistance and Jedi to operations inciting insurgency on distant Imperial Union worlds. 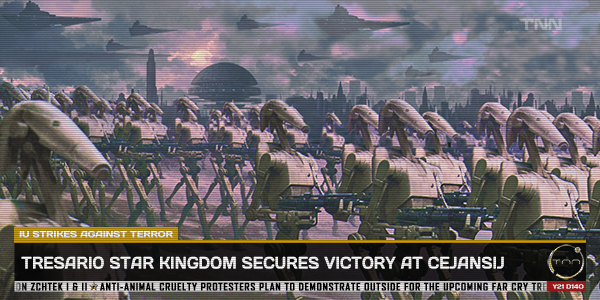 In the Resistance-controlled Halla sector, a Tresarian fleet spearheaded by the Super Star Destroyer TMS Tresario, swiftly established a beachhead in the sparsely defended Cejansij system. Shortly after the victory, Tresarian Minister of Military Operations, Lord Xias, issued a press release expressing Tresario’s intent to seize territories controlled by the Resistance and Jedi Order, saying, “In response to continued threats and aggression by both the Resistance and the Jedi Order following the fall of the New Republic—including assaults on worlds under the governorship of our allies, as well as our own interests—the Ministry of Military Operations, at the direction of the King, has today dispatched elements of the Tresarian Navy and Army to seize control of Jedi and Resistance planets in the Auril, Tennuutta, and Halla sectors. I have dispatched our military with orders to pacify and bring these territories under a degree of peaceful control. Taking these planets will deny safe bases to rebel terrorists and will form an expanded buffer zone to protect Tresarian citizens from the naked hostility displayed by these murderous malcontents unable to accept the peaceful transition of power. All persons in these sectors who now find themselves under the jurisdiction of the Tresario Star Kingdom will be granted full Tresarian citizenship under the Crown, complete with all rights attendant thereto.”

In a display of Imperial Union coordination designed to put maximum pressure on the Resistance’s defensive efforts, Black Sun’s Blades of the Forgotten Prince, led by Star Destroyers BSS Defiant and BSS Destructive Prophecy, launched attacks on the Resistance systems of Camden and Antmuel while the Tresarian fleet hit Cejansij. Speaking after the victory above Camden, Vigo of Defence Thrall Lothbrok emphasized Black Sun’s desire to remove the rebel presence from the borders of its territory, “Peace was never an option to these terrorists who spread fear and war throughout the galaxy. The unlawful attacks on our allies have been cowardly and intentionally negligent, putting untold billions of lives at risk for ego and vanity. Black Sun will not stand by and let this continue, and at the command of Dark Prince Knight I have deployed military assets in order to pacify and seize control of the Resistance worlds and bases in the sectors of Chopani and Morshdine, denying those who would stand in the way of order and peace a safe haven in the north.” 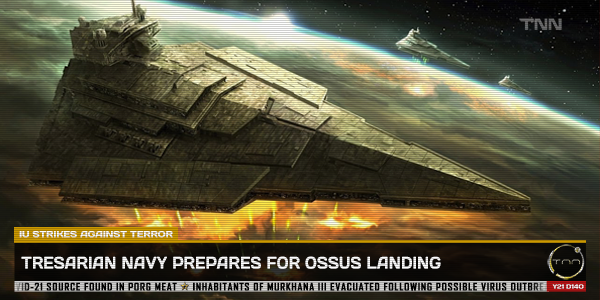 While many of the remaining bases boast powerful defenses, Tresarian analysts expect the Resistance and Jedi to be defeated within a week or two at most. Without the support of the New Republic, the two groups simply lack the manpower to resist determined assaults while simultaneously sending the bulk of their forces to attack planets on the other side of the galaxy. Once these last holdouts fall, citizens of Imperial Union planets in the galactic north will be safe from the threat of rebel terrorists lurking on their borders.