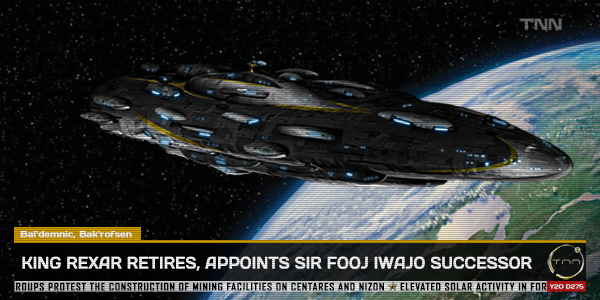 
In a statement to the media, Minister of State, Dame Sydney von Ismay spoke on the legacy of King Rexar, saying, “The Tresario Star Kingdom has always been a flourishing citizen-led and citizen-centered government. After nearly a decade of service to Tresario, including almost two years as our beloved Sovereign, King Rexar will set aside the Crown and return to his roots in the Tresario Star Kingdom Army. We will forever remember King Rexar’s lasting contributions and enduring sacrifice for Tresario. Thanks to his outstanding leadership and unwavering tenacity during one of the most pivotal crossroads in Tresarian history, the Kingdom emerged from the tumultuous times following the death of King Jude Vatz as a vibrant and thriving nation. Even in retirement, the legacy of King Rexar’s leadership will continue long into the future, embodied within the spirits of the countless citizens whose growth he nurtured.”

King Rexar’s successor, Sir Fooj Iwajo got his start when he enlisted in the Royal Anzatan Commonwealth Navy (RACN) as a mid-adolescent. By the time the Anzatan Commonwealth united with the Tresario Star Kingdom in late Year 15, Fooj had risen to the rank of Sub Commander. He continued to pursue his military career as a member of the Tresarian Navy’s newly formed Anzat Core Fleet, and his dedication and talent earned him the esteem of his superiors as he steadily rose through the ranks. In Year 17, he became commanding officer of the Anzat Core Fleet, and in Year 19 he was appointed Fleet Admiral of the Tresarian Navy.

Speaking on Fooj’s qualifications in an interview with TNN, King Rexar’s second-in-command, Lord Vernon Foxtail said, “Sir Iwajo has been instrumental in building a thriving culture and steering the course of our military. His infectious optimism, fervor for helping others, and unflinching steel are an inspiration to us all, and give me great confidence for the future of Tresario.”