Bal`demnic (TNN) – For weeks, Tresarian Peacekeeping Forces have been on the ground supporting the democratically elected government of Krmar II, the Faerytail Family, in defending their homeland against the terrorist organization the Archduchy of Tolonda. After a failure to secure power on Krmar II through legitimate political processes, Tolonda, with support from its ally, the New Republic, has invaded Krmar II and is attempting to seize power by force. Small squads of Tolondan and Republican soldiers have been spotted at various locations on Krmar II, but following the capture of Corey Vildras by Faerytail forces on Day 70, they have avoided confrontation with any of the Imperial Union troops deployed to defend the planet. 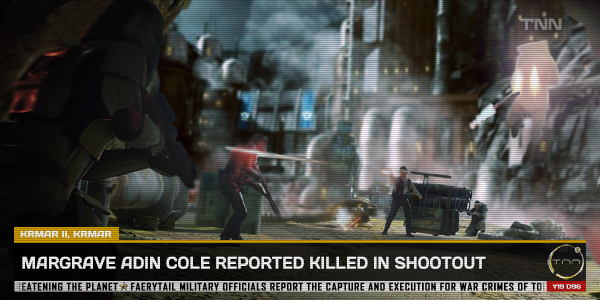 Mid-morning on Day 89, Tresarian scouts reported sightings of Margrave Adin Cole, a member of Tolonda’s Royal Council, accompanied by a small group of Tolondan troops near one of Tolonda’s encampments in the northern hemisphere of Krmar II. Tresarian forces responded quickly, surrounding the Margrave and pressing the attack before any reinforcements could arrive. In the ensuing firefight, Cole and his retinue were all fatally wounded or killed.

Premier Vernon Foxtail released a brief statement, shortly after the incident: “The Imperial Union is leading the fight in the galactic war against terrorism. When possible we are bringing terrorists to justice, and when necessary we are bringing justice to the terrorists. That is the fate that Tresarian forces delivered to the terrorist Cole. The Tresario Star Kingdom and the Imperial Union do not recognize the attempted forcible incorporation of Krmar II into the Archduchy of Tolonda; and we are committed to the cause of the people of Krmar II and their democratically elected government, Faerytail Family.”

When asked to comment on the Union’s military cooperation on the battlefields of Krmar II, King-Father Simkin Dragoneel had to say the following: “I’m really proud of the effective strategy that we came up with during our defense of the citizens of Krmar II from the rule of chaos and mismanagement that is currently threatening the planet. Even though the fighting has been raging for almost a month now we are still holding firm. We are also extremely pleased with the teamwork and cooperation that has been shown by our allies in the Tresario Star Kingdom. Their various forces that came to help were integrated seamlessly and their skill and solidarity has resulted in the elimination of another member of the Duchy’s nobility. The Faerytail Family has been a member of the Imperial Union for a little over six months now, but examples such as this make us feel welcome and valued.” 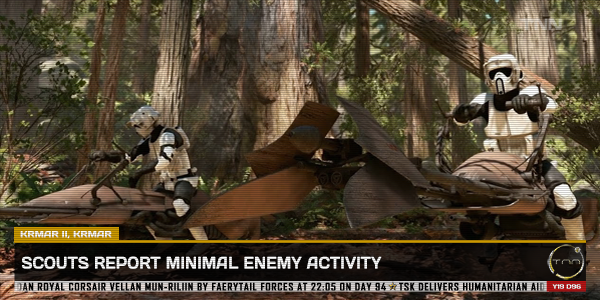 While the Union’s war on tyranny, corruption and orderlessness rages on throughout the galaxy, the defense of Krmar has been rather costless and mostly uneventful. Due to the lack of significant resistance and the fact that no Imperial Union troops have been lost, frontline reports from the Tresarian Ministry of Military Operations merely state that “all [is] quiet on the Krmar front”.